We could liken the area of Mental Health to a train station: Thousands of people are coming, thousands are on the trains, thousands have disembarked. And a number of people who became disabled or lost their lives in a train accident. The millions of people who are not expected to travel are not included in the picture but remain potential users of the rail network, a significant and predictable size.

At the station we will not only meet passengers. We will meet

drivers, trainers, ticket issuers, cleaners and many more. We will not meet, because they remain invisible even though they are directly involved in the overall operation, the traffic regulators, those who decide on the regulations and the price of the tickets, those who calculate the traffic load trends, the necessary investments. At the station we will not only see people.We will also look at basic transport infrastructure (lines, power supply systems), or equipment (trains, ticketing systems, communication, security, waste sorting and collection).

But let us move away from the station, keeping it in our field of vision. If from this distance the person is difficult to distinguish, the field of relations on the contrary expands: the relationship of the railway station with the built environment in which it is integrated (land 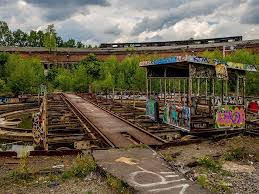 uses and costs, environmental burden, impact on the traffic management) is an element that distance provides us. In fact, if we increase this distance using Google Maps, then global relations emerge: supranational railway networks or multinational suppliers of railway equipment and services. The involvement of education, research or innovation is not insignificant in this big picture as well as cultural differences. Let us just imagine the difference between the Chinese Harmony train of 350 km per hour and the South African Metro rail. But beyond the perceptible there are also the cognitive and the imaginary levels.Each train station includes its history as the current electric train as a means of public transport has its origins in 1804 as a mining train.

All the above are enough to highlight the complexity and interaction between a large number of factors to compose the landscape of the integrated operation of a railway junction. In this landscape, however, we can locate everyone (individual or entity) with a different property but each time depending on the focus point. This fragmented involvement, while providing authenticity or specialization, deprives individuals or clusters of the opportunity to intervene in the transformation of the services used, while by convention the railway system has as its sole aim the well-being of the citizen as an individual and society as a whole. And not only that: fragmented information allows the operation of forces that may oppose this sole (common)goal. The relations are described in the following 2 simple equations (using the mathematical symbols to format our idea) in which the value of the numerator must always be ≥ of the denominator. When this does not happen,and the ratio of equations is > 1, then the goal of prosperity is not achieved.